Chelsea FC has become a hive of loan activity in recent years, earning the infamous nickname “loan army”. This “army” has included a mix of academy graduates (Trevoh Chalobah, Dujon Sterling), cheap young signings (Kenedy, Matt Miazga), and the occasional older player (think Danny Drinkwater). During the 2019/20 season, Chelsea loaned out a staggering 31 players. Compared to other top 6 rivals, Manchester United, Liverpool and Spurs loaned out 13 players in the same period, and Arsenal loaned out 12. The below chart represents the disparity in the ages of players loaned out by Chelsea last season: 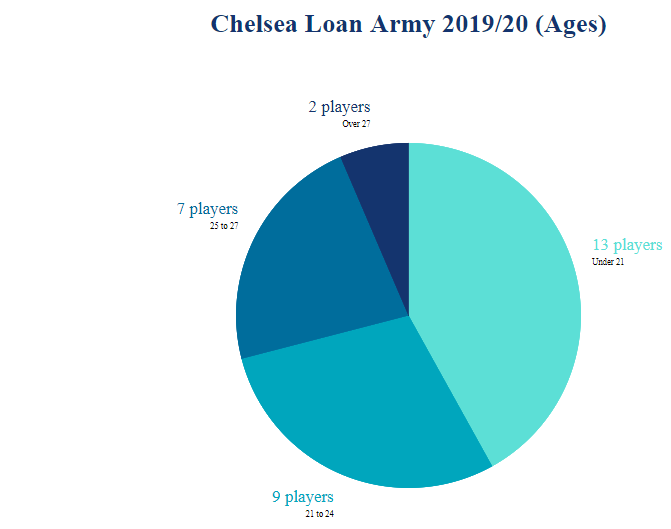 The largest grouping was players under 21 years of age. A particular standout performer in this group was Conor Gallagher, who contributed 17 G+A in 45 Championship games, at Charlton, and then Swansea. Marc Guehi also impressed at the latter club in a run of 13 games from January. The second largest group is players aged 21 to 24; Jake Clarke-Salter performed especially well at Birmingham City, earning himself a start in the senior side for the August friendly v Brighton. At the other end of the age scale, Frenchman Tiemoue Bakayoko rejoined old club Monaco, and played 20 league games as the team finished 9th. Victor Moses was reunited with Antonio Conte at Inter, in a familiar wing-back role, and Danny Drinkwater cut a sullen figure at both Burnley and Aston Villa, struggling for game time and tormented by off-the-field issues.

This forthcoming season, with Chelsea spending just over £200m on 6 big-name signings, the club has again opted to loan out several players, in the hope of providing youngsters with regular game time and a platform to shine, and older players a chance to rejuvenate their career at a different level. 15 players have left on loan so far, with others sure to follow in the coming weeks. This article will shine a spotlight on 4 of the club’s most promising players in the latest “loan army”, who will surely be eager to impress at their new clubs, with a view to staking a place in the first team in the future.

The signing of Malang Sarr proved to be a bit of a surprise for Chelsea fans, confirmed a day before the highly awaited Thiago Silva, in a club post which stated Sarr would “spend the coming season out on loan, providing the chance to gain valuable game time and add to his experience so he will be ready to join our squad”. Whilst the signings of centre backs Matt Miazga and Michael Hector in the bizarre 2015/16 season were opportunities to generate a profit after a couple of different loans, it is truly believed Malang Sarr is good enough to feature regularly for Chelsea in roughly 2 to 3 years.

Only 21, younger than Tomori, Sarr has 103 Ligue 1 appearances to his name, with his best football coming at left centre-back, before he was played in the unfamiliar left-back role by new manager Patrick Vieira. Arsenal and Barcelona both allegedly registered an interest in Sarr, who left as a free agent from OG Nice and penned a 5 year deal with Chelsea. Sarr has represented France at every youth level, and is determined to play for the senior side, despite his eligibility for Senegal. Sarr has a number of stand-out attributes; his experience and maturity, tough tackling and bravery, and excellent range of short and long range passing with his left foot, and represents a classy capture by Chelsea. With Thiago Silva, Antonio Rudiger, Kurt Zouma and Andreas Christensen above the pecking order for the centre back slot right now, Sarr has been linked to a number of clubs for the 2020/21 season, including both Borussia Moenchengladbach and Bayer Leverkusen in the Bundesliga. Sarr is definitely a player worth monitoring wherever he does go; regarded by those inside the club as a potential first team player in the coming years.

Ethan Ampadu’s iconic dreads may have gone, but the talent certainly remains, despite an underwhelming loan spell at RB Leipzig last season. The young Welshman only played a total of 78 minutes, across 3 substitute appearances, as Julian Nagelsmann preferred a back 3 with Orban, Upamecano and Konate. Now 20, Ampadu is a very talented young player desperately in need of regular first team football. With 17 Welsh senior games to his name, and versatile in back 3 or 4, as well as in midfield, he represents a serious prospect.

His interception skills, passing range, height and movement, and elegance on the pitch have earned comparisons to David Luiz. After initially looking to remain with the first team for the 2020/21 season, Ampadu has joined Chris Wilder at Sheffield United, after Wales manager Ryan Giggs suggested he needed a loan spell with regular, first team football to truly kickstart his career. In fact, Wilder said “he brings a lot of qualities to the group and he’s someone we’ve tracked for two or three seasons”. Ampadu’s versatility may prove invaluable to the Blades, who operate with a small squad. He is able to play alongside fellow youngster Sander Berge in midfield, and challenge older players like Chris Basham for a centre back role. In any case, Chelsea fans will hope Ampadu blossoms up north as the Blades again challenge for a top 8 position.

As mentioned in the first paragraph, Conor Gallagher is a very bright young talent, and definitely one to monitor ahead of the new season. A Chelsea player since the age of 8, Gallagher progressed through the various levels of the academy system, playing in several different midfield roles as well as out wide, before establishing himself as a traditional “box-to-box”, like his idol and manager Frank Lampard. He also won the u17 World Cup with England in 2017, alongside Callum Hudson-Odoi and Marc Guehi, playing in the final. Gallagher, who made the bench for the Europa League final win v Arsenal in 2019, is a midfielder with a high work rate, skilful passing range, and an ability to shoot from distance, regarded as a “complete midfielder”. Like Ampadu, Gallagher’s versatility is one of his key attributes; having played 23 games in attacking midfield, 26 games in central midfield, and 52 games in defensive midfield in his career to date.

Gallagher joined Championship side Charlton Athletic on loan in the summer of 2019, and scored 3 goals in his first 6 games, including a classy finish v Brentford, winning the EFL Young Player of the Month Award for August. After scoring a further 3 goals, and missing just 1 Championship game for Charlton, Gallagher joined Swansea City in January 2020 for the remaining 6 months of the season. On the Welsh coast, Gallagher played 19 games and provided 7 assists as the Swans lost in the play-off semi finals, with ex England u17 manager Steve Cooper leading a youthful side with several loanees. His excellent form was noticed by those at Stamford Bridge, signing an improved 5 year deal, before joining newly promoted West Brom for the coming season. The young midfielder’s versatility, goals, work rate and energy may prove very valuable for the Baggies in their quest for Premier League survival, with manager Slaven Bilic stating “he has the potential, the ingredients are there … this is a great opportunity for him and a great opportunity to make that step forward”. With question marks arising over the roles of Ross Barkley, and, to a lesser extent, Ruben Loftus-Cheek in the first team, another productive loan for young Gallagher may force Lampard to seriously consider involving him in the 2021/22 season.

Certainly the lesser known of the 4 selected players, and the only one without a loan to one of Europe’s “top 5” leagues, Tariq Uwakwe remains a talented youngster with an interesting profile, who will spend the coming season with Accrington Stanley in League One. A Chelsea player since the age of 8, Uwakwe can play in a number of midfield roles, having played 16 career games as an attacking midfielder, 18 games in a central role, 10 on the left, and 13 games on the right. After being linked with a move to Derby County, and the chance to follow in first-team regular Mason Mount’s footsteps, Uwakwe finalized his first loan move on 7th September with a 12 month deal to Accrington Stanley. Standing at 5”10, Uwakwe is another young player whose versatility and ability to play in a number of positions is a key strength, an attribute highlighted by Chelsea on the club website. Uwakwe made his debut in a 7-0 win v Leeds u21s, where he scored a hat-trick, adding Accrington’s 7th goal on the 72nd minute, and taking home the match ball. Uwakwe scored again four days later in a 2-0 league win against Peterborough United with a curling effort from outside the box. As Accrington Stanley look to secure another season of League One football, Uwakwe has an opportunity to become an integral player with his goals, assists and pace, and potentially earn himself a move to a Championship or Premier League club for the 2021/22 season, having already been linked to Hull City and Swansea City previously. If he can continue his impressive form into the new league season, even more clubs may start queuing up for Uwakwe’s services.