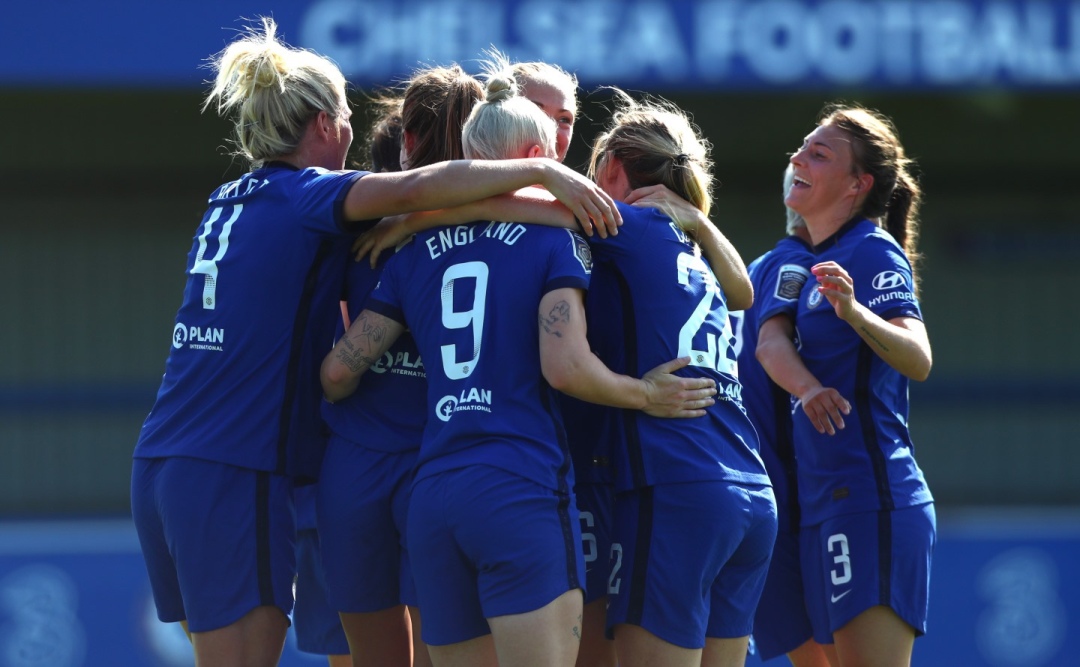 Chelsea began their title defense last week with a 1-1 draw against Manchester United. Fans were, no doubt, looking forward to this week’s fixture versus Bristol City as the Robins are one team Chelsea know how to get a good result against.

Emma Hayes made 4 changes to the starting line-up with Ann-Katerin Berger playing in goal after being absent last week. Bethany England, Hannah Blundell and Erin Cuthbert had their first league starts in place of Guro Reiten, Jonna Andersson and Sophie Ingle

The game started slowly as it does sometimes but Chelsea looked comfortable from the start as expected. We had some exciting play but the first goal came in the 15th minute. Millie Bright’s cross field pass found Cuthbert who laid up a clean pass for Fran Kirby to fire home. Chelsea looked to be in charge now creating numerous opportunities that had the Bristol City defense on their toes.

Chelsea had another shot on goal in the 26th minute via a Ji So-Yun freekick that didn’t really trouble the Robins’ keeper, Sophie Baggaley.

Not long after that, the Blues had another chance to double their lead in the 31st minute. Bristol City’s number 10, Yana Daniels, brought down Ji in the 18-yard box and Maren Mjelde had no trouble banging in the resulting penalty.

Barely three minutes after that, Melanie Leupolz headed in Cuthbert’s freekick to make it 3-0. At this point, it was clear that the Blues were fully in charge and that more goals were sure to come. Cuthbert got a goal of her own in the 36th minute. Bright provided the assist and the Scot had no problem firing in with her right foot.

The last goal of the first half came in the 40th minute after Bright beat her marker to head in a Mjelde freekick. At the end of the first half, Chelsea were comfortably in front with 5 goals from 10 attempts while Bristol City trailed behind with no attempts on goal.

The second half began almost as the first half had ended. As expected, the Robins decided to play a low defensive line to prevent any more goals from coming in and it seemed to stifle the Chelsea attack in the beginning but not for too long. The Blues’ first close chance at goal came in the 51st minute but Kirby’s shot was just too wide. Kirby came close a second time but shot too wide again.

It was England who started the scoring in the second half in the 66th minute after firing in a loose ball from a tight angle.

Just after that, Hayes made some changes; Pernille Harder, Niamh Charles and Maria Thorisdottir came on for England, Leupolz and Mjelde. Within a few minutes the substitutes combined to make it 7. Harder’s shot, after some beautiful foot work, was pushed out by Baggaley but Charles was well positioned to slot in our 7th. In the 73rd minute, Charles returned the favor and squared the ball for Harder’s first Chelsea goal and our 8th of the afternoon.

The Blues continued to attack with Kerr having some really close chances. She eventually found the back of the net in the 86th minute. Harder provided a clean through and Kerr had no trouble slotting in from close range. Substitute Drew Spence came close twice in the last few minutes but couldn’t get on the score sheet as well. It turned out that Kerr’s goal was the final for the day, the final scoreline 9-0.

It was all Chelsea today with a solid performance as expected. The whole team showed up as our 9 goals were scored by 9 different players. We created enough chances and were more clinical than we’ve been in recent games. The defense didn’t have much to do but they also contributed up top. We managed to control the midfield and fought hard to retain possession. It was a very decent performance from the whole team and one that fans will be expecting in the coming matches.

After two consecutive average performances, this match was important to build up our confidence and momentum going into our subsequent games.

Depending on how other games go, Chelsea can be sure of a top 3 spot as we head into the international break.