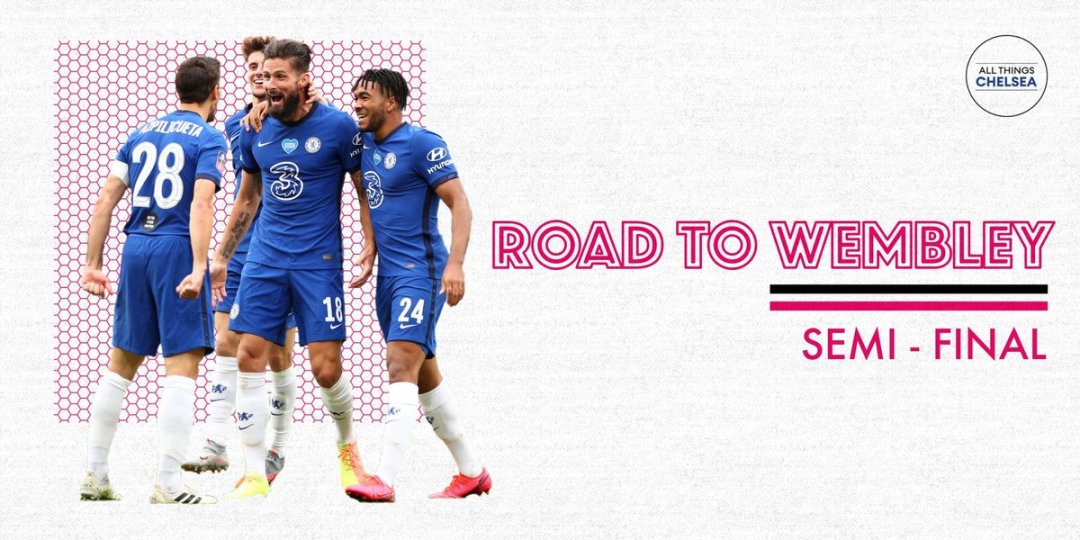 On the back of an unconvincing victory at home to Norwich, Chelsea headed to Wembley to face the side they had lost to thrice this season, in the form of Manchester United. The Red Devils coincidentally beat the Canaries in the quarterfinal of the FA Cup to set up the semi-final showdown, while we had slightly tougher opponents in Leicester. Nonetheless, there was a lot at stake in this game- with the sight of zero spectators in the grandeur of the largest stadium in the United Kingdom a sight not to behold. Chelsea were banking on their remarkable record at Wembley to see them get through to the final and face their London rivals Arsenal, who stunned everyone by beating Manchester City in the other semi-final roughly 20 hours before this game was due to kick off.

Manchester United were the clear favourites in this game, with Chelsea having failed to beat them since the 19th of May, 2018 (2D, 4L) in the FA Cup final, courtesy of a penalty by Eden Hazard. The Reds were also in incredible form since the Premier League resumed in June, having won six of their eight games, with the attacking trio of Anthony Martial, Bruno Fernandes and youngster Mason Greenwood in the form of their lives. Chelsea also matched their tally of wins, but lost the other two games while United remained unbeaten. Hence, based on recent form building up to the game, the teams were more matched on paper than most would believe- but Chelsea were coined the underdogs, and touted to cause another upset to the anticipated Manchester Derby in the final of the FA Cup.

Chelsea lined up with the 3-4-3 formation which has become something of a tradition for the ‘big games’; rightfully so, as we have picked up some impressive wins with that particular formation. Caballero continued in goal as the cup keeper, while Jorginho and Kovacic continued to feature as the midfield duo owing to the absence of Kante. The key talking point was Christian Pulisic- who was left on the bench by Frank Lampard despite his impressive form post lockdown. However, the manager later clarified that the American was nursing a minor knock.

While Chelsea lining up with the three-at-the-back system was expected by a few, not one soul anticipated the opposition’s starting eleven. Ole Gunnar Solskjaer shocked the United and Chelsea fans alike by opting to play a 3-4-1-2 formation, dropping key players such as Martial, Pogba and Greenwood to the bench. Brandon Williams featured at left-wing back owing to Shaw’s injury, while Eric Bailly made a rare start as the third centre-half.

The game began on a cautious note, with both sides not committing men forward. However, Chelsea seemed the more composed side, and often found an extra man on the right flank when Azpilicueta would push front from his right centre back position to assist the already advanced Reece James and Willian. De Gea was soon tested from a swerving Reece James effort from just outside the box, before his partner on the opposite flank, Marcos Alonso, just put too much into his header as he watched the ball go harmlessly over the bar. Caballero was called into action soon after, as he palmed a Bruno Fernandes over. Kurt Zouma then headed wide as another chance went begging for Chelsea, but injured Eric Bailly in the process, who carried on. However, he was soon forced off following a collision with Maguire, and Ole chose to bring Martial on for the centre-half, meaning United returned to their favoured 4-3-3 formation.

Despite their formation change, it was Chelsea who drew first blood deep into first half stoppage time. A huge chunk of time was understandably added at the end of the regular 45 mins, and Chelsea utilised this opportunity to the maximum by taking the lead into the break. Another case of Azpilicueta being the extra man on the right flank, the Spanish defender whipped in a delicious cross for the resurgent Giroud to tip past De Gea. The goalkeeper did seem to get a touch on it, but was unable to keep it from crossing the line. Half-time, Chelsea 1-0 United.

As Giroud got the ball rolling for the second half, the spring in the step of the players donning the blue kit was noticeable. This was amplified just 46 seconds into the second period, as Mason Mount doubled Chelsea’s advantage with a grounded strike from range. While the error by the goalkeeper for the first goal was arguable, no considerations could be made for this attempted ‘save’ by De Gea, and any semi-professional goalkeeper would have kept this from hitting the back of the net. However, the Spanish international made up for this error by making a great diving save from a deflected Giroud shot. This counted for nought as Chelsea scored the third goal soon after when Maguire unintentionally tipped a low Alonso cross over the goal-line, despite earlier visuals leading us to believe that Rudiger had turned it in.

United did pull one back in the game to ruin our cleansheet, courtesy of Bruno who scored from the spot (surprise, surprise) after Hudson-Odoi blatantly brought Martial down in the penalty box. The young English winger did have a chance towards the end of the game after good link-up play with Tammy Abraham, but his shot went narrowly over the near post. Full time, Chelsea 3-1 United, and its an all London FA Cup Final!

Man of the match

While all Chelsea players put in a fantastic performance, some individuals certainly shone more than others. World Cup winner Olivier Giroud was brilliant once again, and scored a goal to continue his fine form, while youngsters Mason Mount and Reece James were incredible. However, my man of the match was our Croatian midfielder Mateo Kovacic, who was fantastic yet again alongside Jorginho in the middle of the pitch. The duo, which is affectionately called Jovacic, was excellent to nullify the threat of Bruno Fernandes, and continued to dominate the pitch even after the introduction of Pogba. Therefore, my MOTM for this game is POTY-elect Mateo Kovacic.

Both Chelsea and Manchester United managed to qualify for the Champions League, as the latter finished above on goal difference. While the Red Devils do not have a game until the Europa League returns, Chelsea have a final to look forward to, which gives Lampard a brilliant chance at winning a trophy in his first year in charge, following which we head to Munich to face FC Bayern in the reverse fixture of the Round of 16 of the Champions League, which saw us get hammered 3-0 at home.

One thought on “Road To Wembley: Semi-Final vs Manchester United”