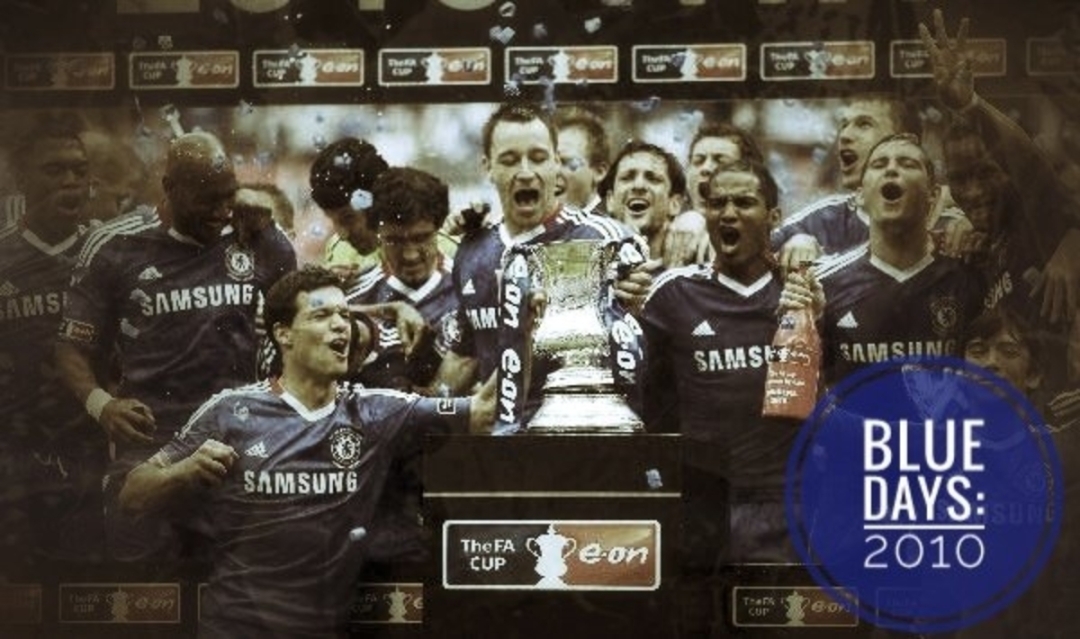 We continue our build-up to Saturday’s FA Cup Final by taking a look at another FA Cup Blue Day. Tom recalls our FA Cup Campaign of 2010, in which we secured a famous first League and Cup double in our history! It was also a special day for him personally, being his first trip to Wembley to support the Blues in an FA Cup Final.

It was a special team and a special season at SW6. Carlo Ancelotti carried on the work of Guus Hiddink to create an unstoppable force in Blue, which had peaked at the perfect moment. A closely-run title race was clinched by remarkable seven-goal victories over Stoke, Aston Villa and Sunderland; and confirmed with an eight-nil victory over Wigan on the final day!

This team bled goals, and the team scored over one-hundred in the Premier League for the first time in history, and after achieving that milestone they had the opportunity to secure another. Chelsea had never accomplished a League and Cup Double in their history before, and a Wembley Final against last-place Portsmouth provided the perfect opportunity.

Road to the Final

Watford were dispatched for the second time in as many years in the FA Cup, with a brace from Daniel Sturridge among the five that were put past the Championship outfit.

Nicolas Anelka and Daniel Sturridge were the scorers as Chelsea eased past Preston on a cold Saturday lunchtime at Deepdale.

Cardiff provided sterner opposition than the scoreline suggests, with the scoreline level well into the second half. Michael Chopra’s first-half equaliser was the only goal that Chelsea conceded in the FA Cup this season, keeping clean sheets in every other round.

Frank Lampard and John Terry were on the scoresheet as stubborn Stoke were beaten at Stamford Bridge. This is the only time both legends scored in the same FA Cup fixture.

Aston Villa, who had qualified for Europe, provided a tough test in the Semi Final. Again, the scoreline does not tell the entire story. The Villans held firm until Didier Drogba broke the deadlock in the 68th minute. They had several chances to equalise, but goals from Florent Malouda and Frank Lampard confirmed the victory in the final minutes.

I was a Chelsea mad eleven year-old at the time, and I will never forget when my dad summoned me to the kitchen to reveal to me the FA Cup Final tickets he had obtained. I am pretty certain it bought a tear to my eye.

Our first campaign under Carlo Ancelotti had brought remarkable football and a first Premier League title in four years. Frank Lampard, Didier Drogba and sidekicks Anelka, Kalou and Malouda were firing on all cylinders and opposition were powerless to their charge for silverware.

A double had seemed inevitable. After scoring eight against lowly Wigan an FA Cup Final victory against foot-of-the-table Portsmouth was surely going to happen? In my naivity, I sat on the train to the ground thinking not whether we would win, but how many we could put past Portsmouth in 90 minutes. Wembley on such an occasion as the FA Cup Final is a unique sight, and I was astonished by the shower of Blue shirts and the passion of the pre-match opening ceremony and Abide with Me. There really is not a fixture anywhere in the world that can match the final of the oldest competition in the world.

Chelsea started the game as I had expected, utterly dominant. Portsmouth could not cope as Frank Lampard and Michael Ballack marshalled the midfield and supplying Didier Drogba and Salomon Kalou with frighteningly consistent ease. The play was almost entirely in Portsmouth’s final third, and a goal seemed inevitable.

In that first half, Chelsea managed to hit the woodwork an extraordinary five times. Frank Lampard stuck the post from a speculative effort, then Salomon Kalou somehow hit the bar from an open goal two yards out. John Terry hit the post from a Frank Lampard free-kick, after which David James diverted Didier Drogba’s rebound to the underside of the crossbar. Didier Drogba then hit the post again just minutes later, after beating David James in a one-on-one. Astonishingly, Branislav Ivanovic and Didier Drogba both hit the woodwork again in an extraordinary phase of play in first half injury time, before the ball safely fell into the goalkeeper’s hand.

We could not believe our eyes as the half-time whistle blew. Chelsea had been so fantastically dominant, yet the scoreline remained goalless. Portsmouth had lived a charmed life, but memories of the Crazy Gang and the Magic of the Cup remained our head. What if it wasn’t our day?

Our fears were almost realised as Portsmouth won a penalty early in the second half, after a mistimed tackle by Juliano Belletti. It was one of their first forays into the Chelsea area, and Kevin-Prince Boateng now had a golden opportunity to put Pompey a goal ahead.

Remarkably, Boateng did not take advantage. It was perhaps the most tame penalty in FA Cup Final history, rolling softly into the legs of Petr Cech. Chelsea, almost immediately, were able to wrestle back control at the other end. In one of the iconic FA Cup Final goals, Didier Drogba sweetly struck a free-kick he had won past David James – and ironically in off the post!

The Double was back on and did not look in doubt after this. Chelsea managed the game well, and were unlucky not to go further ahead. Uncharacteristically, Frank Lampard struck a penalty wide shortly after Drogba’s opener which would have put the result beyond doubt.

Our glorious season ended with the final whistle under the basking May sunshine, retaining the FA Cup we had won a year before under Guus Hiddink and securing a historic first double in our long history.

A fantastic day all round!

Do you have any special memories of 2010? Were you at Wembley for Drogba’s Free Kick? Let me know in the comments below!