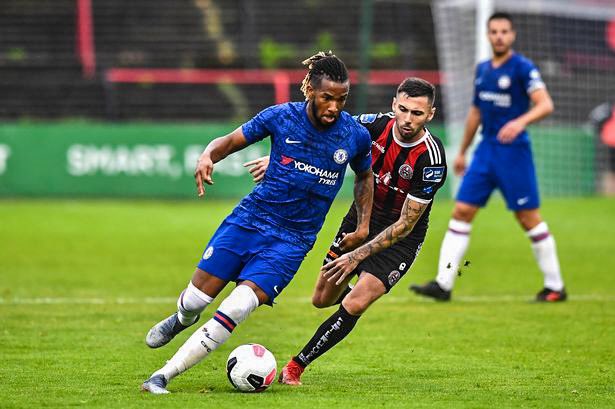 A quick search of Kasey Palmer’s name in isolation shows you a footballing maverick. Endless compilations of skills, tricks, flicks, mazy dribbles and stunning goals at every level in youth football can’t help but impress and dazzle anyone who watches them. Kasey Palmer is blessed with a level of technical talent not normally associated with the English game – where pace, power and stamina tend to rule the roost – and impressive attacking intelligence. Showing these videos to someone who doesn’t know a lot about football would probably lead to them inferring that Palmer was a star player for club and country.

Sadly, the reality does not reflect this fallacy. Kasey Palmer is a player with many great qualities, but so far he has been unable to truly stamp his authority on a team and really become the talismanic No. 10 that his youth career suggested he might be.

Kasey Remel Palmer spent his early years in the Charlton Athletic academy, in the heart of the Lewisham constituency of South-East London. With Charlton at this point occupying the position of established Premier League club, it seemed a logical choice for a young player who would be dreaming of emulating Scott Parker, the Addick’s star midfielder who had been sold to Chelsea a year prior.

The switch would come earlier than expecting in Palmer’s career. With Chelsea starting to dominate local youth football in London and beginning to sow the seeds of a golden generation, they turned towards hoovering up top talents who impressed against them at youth level, or impressed at youth tournaments. Whether there was foul play involved between Palmer and the Blues is a matter for discussion – with Palmer yet to sign a contract with Charlton and with his academy contract ticking away every single day, Chelsea were able to steal in and nab Palmer for a nominal compensation fee. In retrospect, this amount would certainly not reflect the success that Palmer would have at youth level.

A relatively late acquisition to the Chelsea set-up, Palmer nonetheless became an important option for Chelsea’s youth sides in the 2013-14 season under Adrian Viveash’s tutelage. Although his appearances were sporadic, the young Palmer scored once against West Brom U23s and went on to play a part in the knockout finals against the two Manchester clubs, lifting his first piece of silverware at youth level. Palmer doubled his medal collection a month later as Chelsea triumphed over local rivals Fulham to lift the FA Youth Cup in a stunning 5-3 aggregate win. Palmer himself played a part in the final, but was substituted for Isak Ssewankambo, who would go on to kickstart the Blues’ comeback.

Palmer was one of the older players in the youth cup squad, and his promise was already shining through. Although Chelsea had a number of players with impressive physical prowess at this time, such as Ruben Loftus-Cheek, Nathan Ake and Dominic Solanke, Palmer blended this physical strength with technical skills and quick feet. Already Chelsea were developing a squad at youth level that possessed technique, strength, quality and depth in abundance.

The 2014/15 season began with Palmer firmly establishing himself as a popular option for Chelsea’s U21 team, playing as an attacking midfielder whilst occasionally being deployed in a wide right or wide left role. In Premier League 2, Palmer made fifteen appearances, contributing to four goals and grabbing two assists. Although he got frequent minutes on the pitch, Palmer rarely completed ninety minutes, only achieving it once during the entire season. This was because of three reasons.

Firstly, Palmer often put in a shift, tracking back to try and win the ball deep and start counter-attacks, and his young age meant his stamina depleted rapidly. Secondly, Palmer sometimes ended up being very wasteful on the ball and would embark on mazy dribbles and runs, only to head down a blind alleyway and lose the ball – a common hazard of top level youth football for attacking players. Most worryingly, however, was that Palmer’s status as playmaker made him a prime target for crunching challenges and defensive heroics, and he often left the pitch limping or with knocks.

Palmer also featured heavily in the FA Youth Cup again as Chelsea once again took the crown – he scored his only goal in the drubbing of Swansea in the 5th Round. The London-born midfielder lifted another trophy as Chelsea won the UEFA Youth League for the first time, scoring against Russians Zenit St. Petersburg in the Round of Sixteen four minutes after being subbed on at half time. In total, Palmer made 27 appearances, playing just over 1,000 minutes.

Whilst the 2015/16 season was not memorable at the senior level for Chelsea as they finished in the inglorious position of tenth in the Premier League, Kasey Palmer and Chelsea’s youth teams were having no such problems. With another year under his belt, Palmer was a much more fearsome proposition. Possessing mercurial dribbling talent and a surprising turn of pace, Palmer began to dictate matches from the attacking third. Many young defenders tried to tackle him, and more often than not, they ended up bewildered and embarrassed by his fleet of foot and technical skill.

There was a development to Palmer’s physique too – he no longer tired quite so easily and was able to keep going for longer. 11 out of his 17 league appearances saw him playing the full 90, and he grabbed goals against Spurs and Manchester United – just two of the five he’d achieve that season. Long range firecrackers, deft curlers, well-crafted moves and clever finishes were just some of the options in Palmer’s repertoire, and even though he perhaps should have scored more goals considering the number of chances created – both by others and himself – it was very clear to opponents that he was one of the prime talents in one of the most dominant Chelsea youth squads of the decade.

Palmer once again starred as Chelsea retained the UEFA Youth League crown, as an integral attacking threat throughout the tournament. He scored twice in the opener against Maccabi Tel Aviv, grabbed a goal, assist and then got sent off against Porto in the 3:3 draw, captained Chelsea in the 0:0 reverse against these opponents, scored in the tense last 16 penalty shoot-out against Valencia, grabbed an assist against Ajax in the quarters, and scored in the semi-final and final. Palmer’s prowess at youth level didn’t go totally unnoticed as Guus Hiddink called him up for matchdays against Swansea and Liverpool, but frustratingly Palmer didn’t leave the bench.

After dominating at youth level, Palmer would, like most Chelsea youth players now, have to endure the juggernaut of copious loan deals. Palmer’s loan deal to Huddersfield seemed like an inspired choice, as they searched for cover for Jack Payne, and he proved a hit almost instantly, scoring on debut against Brentford, before grabbing an assist off the bench against Newcastle. Palmer had to wait until Matchday 5 to get his first chance to start for The Terriers, but he continued interspersing starts with substitute appearances. He scored his second Huddersfield goal against QPR and enjoyed a spate of matches between November and December, where he impressed with his skill and quality. 2016 had been a great year for Palmer’s development and his stock was rising on a frequent basis.

Sadly, 2017 didn’t go the same way, despite Palmer getting his first senior FA Cup goal against Port Vale. Concerns were beginning to be raised about Palmer’s fitness, with a spate of substitute appearances following a prolonged spell of playing ninety minutes. Then against Yorkshire rivals Leeds, Palmer was crunched and went down in a heap, before being replaced by fellow Chelsea loanee Izzy Brown.

This was, in effect, the end of his regular season. Persistent achilles tendon problems would keep him out until the playoff final, where he was substituted in for Izzy Brown in extra time. Huddersfield won on penalties against Reading, Palmer extended his contract at Chelsea until 2021 and it was agreed he would return to the John Smith stadium for another season. This seemed like a good fit at the time, as David Wagner had rewarded him with regular minutes, and Palmer had been starting to assert himself as an important player before his injury.

Grinding to a Halt

The reality did not reflect the expectation. It started well as Palmer featured in the opening three games, but then a hamstring injury kept him out for ten match-days and after a disappointing performance against Everton, Palmer did not return to the match-day squad again. A loan back to the Championship and Derby County provided sporadic minutes off the bench and the occasional start. Palmer grabbed goals against Leeds and Reading and played fifteen times in total. Derby reached the playoffs, but unlike Huddersfield, they were not successful in reaching Wembley. Palmer was subbed on against Fulham for the final twenty minutes but was unable to turn the 2-0 loss around. With less than 800 minutes played all season in all competitions, this was a wasted year.

Fast now approaching his 21st birthday, it seemed hard to suggest Palmer had kicked on from his promise at youth level. Another loan to Blackburn Rovers in the Championship seemed an uninspired choice – perhaps a year at Vitesse following in the footsteps as a ready-made replacement for Mason Mount would have been a better option in hindsight. With a few starts and substitute appearances, Palmer did score as The Riversiders triumphed over Brentford but he then frustratingly began to dip in and out of action, staying stuck on the bench or sometimes starting in heavy losses. A final-minute substitute appearance against West Brom surmised this loan spell perfectly – utterly pointless. Now aged 21, Palmer needed to be playing week-in, week-out and Chelsea rolled the loan dice again to send him to Bristol City. A goal on debut against Bolton again showed his promise, but Palmer was used sporadically as a substitute by Lee Johnson for the rest of the campaign.

Despite this, both manager and player seemed happy with the situation. Palmer became a cult hero, with a colourful chant to boot and when given the chance, he showed his technical prowess to a fanbase that lauded quality, passing football. Johnson made Palmer a key summer target and Chelsea were happy to offer him a chance to rebuild his stunted career. Palmer has one goal and three assists so far in 23 appearances this season, but before the COVID-19 break, he was worryingly falling back into the pattern of either being on the bench or not featuring at all.

Whilst Palmer himself is carving out a very solid professional career in the Championship, his impressive performances at youth level suggest he should be so much more. So why exactly has Palmer failed to hit the astronomic heights which he seemed destined to reach?

In this case, the player’s attitude is unquestionable. He’s constantly tried to show what he can do and put in the hard yards in frustrating circumstances on loan. However, his development has certainly been hampered by injuries and the inevitable rehabilitation. The relentless grind has driven the sparkling diamond of skill, technique and guile in to a moodier, more abrasive charcoal, waiting for a spark to reignite it. He needs a chance to show what he can do for a full season, staying fit, creating chances and spearheading a midfield, to once again propel his career back towards the heights everyone expected of the prodigious young talent.