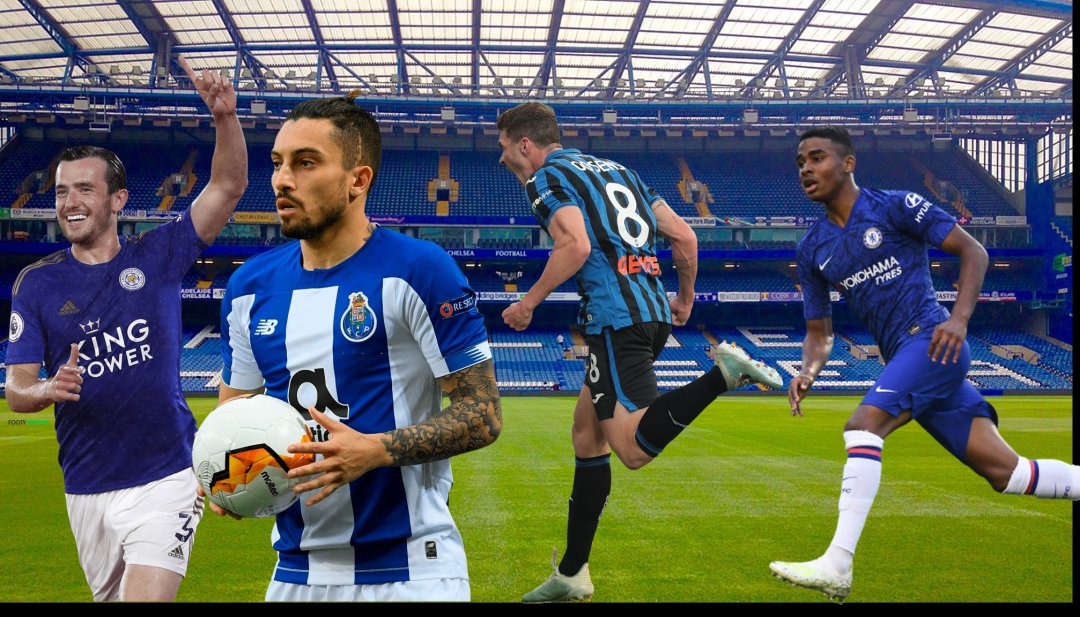 Ever since Ashley Cole retired, one of the recurring questions on Chelsea fan’s lips has been how to resolve the left-back position. Many have tried, and none have succeeded. Okay, so expecting players to reach the standard of the best left back of the last fifteen years might be a bit unfair. But whether it was established talent in Filipe Luis, young vigour in Ryan Bertrand or the wildcard transfers of Marcos Alonso and Emerson Palmieri, there has been no player stepping up to make themselves undisputed number one in that position for over a season. Frank Lampard is the latest manager to get this unenviable task.

With speculation surrounding both Emerson and Alonso, it’s time to look towards the future. With the current speculation, I’m going to review the four names in the frame to be Chelsea’s next left back, and hopefully put forward a convincing argument for them all.

On paper, Ben Chilwell should be the obvious choice for any top club that needs a left back for the next ten years. Pacey, athletic, relatively injury-free, solid in the tackle and a potent attacking force, Chilwell has cut his teeth first as a deputy to the immensely popular Christian Fuchs at the King Power Stadium and then usurped the Austrian in the starting line-up after Fuchs sustained an injury. Now approaching 100 Premier League appearances, he is a mainstay in the exciting Leicester line-up under Brendan Rodgers. In terms of attacking stats, Chilwell has just 3 goals and 9 assists, although it’s worth noting our benchmark Ashley Cole only achieved 15 goals and 31assists in his entire Premier League career. (For reference, Marcos Alonso has 20 goals, 12 assists, hit the woodwork 11 times and 51 clean sheets in 131 apps – I couldn’t believe it either.)

At just 23, Chilwell has time on his side to improve on these numbers. Although fullbacks are increasingly offensive, I always prefer a good solid defender – the attacking midfielders, wingers and strikers can do the scoring and creating. Chiwell’s defensive numbers aren’t bad – in a notoriously open Leicester team he’s been part of a defence that has achieved 23 clean sheets and his tackle percentage of 63% isn’t to be sniffed at, but just one last man tackle and ten blocks so far (compared to Alonso’s 56) makes for grim reading. His stats on 50-50s, recoveries, duels won and aerial battles won are impressive, although his crossing stats are similar to Alonso’s: both boast an 18% completion rate.

There’s no denying that Chilwell is a decent Premier League player, but at the moment, he is still quite raw and has a long way to go before he is considered a top international player in his position. He’d probably be a good signing… if Leicester weren’t going to demand a crazy fee for him. This isn’t going to be like a N’Golo Kante where there is a silly release clause to exploit. His contract doesn’t expire until 2024, and with Leicester currently tussling at the top end of the Premier League table, not to mention the fact Chilwell is young and English, it’s going to a £60m+ fee quoted. Which hopefully should be a signal to Chelsea to step back.

For this section, I have to give huge thanks to Rodolfo (@RodolfoGaming) for his in-depth analysis and insight into a player I’ve seldom seen complete 90 minutes. The only thing I didn’t agree with was his hugely optimistic value of how much Porto could get for Telles – has he never heard of Marina Granovskaia?!

When people talk about the heir apparent to Marcelo’s left-back throne for Brazil, two ‘Alex’ are always mentioned. Alex Sandro and Alex Telles. The former is part of quite possibly the most frustrating, tedious, and ultimately disappointing transfer saga that Chelsea have experienced on recent years, on par with missing out on Sergio Aguero. The latter is a name perpetually linked with Chelsea, since his days at Galatasaray. Now at Porto, the dynamic fullback has become a fan favourite and at twenty-seven, he should be in his absolute prime.

Already this season, Telles is in double figures for goals and has six assist in thirty-nine games. These numbers are bolstered by his prowess at set-pieces, but that’s not necessarily a bad thing. There is a reason why Porto fans call him King of Assists. He does have a bit of temperament, shown by five yellows and one red card this season, but he can also be a match-winner, having taken 3 Man of the Match awards home in the LIGA NOS this season. A genuine all-rounder in the fullback role, and fast approaching 200 games for the Dragões, Telles has 21 goals and a staggering 52 assists to his name.

The question for Telles is clear – would his dynamic, attacking style translate into the Premier League? His defensive stats are average at best, but as Porto are so often on the front foot, this doesn’t usually affect them. Would this be the same at Chelsea? Rodolfo seems pretty sure that Telles would adapt, describing Telles as a beast in every aspect. I quote: “Reminds me of Alex Sandro, but better.”

One thing Telles definitely does represent is good value. With a contract expiring next summer, priced at just £25-£30m, and with Pini Zahavi pulling the strings, don’t be surprised to see the Brazilian international end up at Stamford Bridge.

I have to give thanks to the excellent Nige (@AtalantaNewsUK) for the insight into Robin Gosens. I’ve watched a tiny bit of Atalanta this year (I recommend it to anyone that loves quality football), but his detailed knowledge of Gosens’s playing style was greatly appreciated.

Robin Gosens has been linked to Chelsea recently and although lesser known than the previous names, Gosens is a gem waiting to be uncovered. He gets through an immense amount of work as wingback for Atalanta, but previously played as pure left back for Heracles before joining La Dea. The engine and power Gosens displays week-in, week-out relieves the pressure on the centre backs and allows him to provide a constant presence in all thirds of the pitch. Gosens, like Atalanta in general has evolved under Gian Piero Gasperini’s excellent management and it is the Italian’s approach that has benefitted Gosens. Rather than being restricted as at Heracles, he is encouraged to bomb forward and support Atalanta’s fearsome attack and his impressive attack positioning has rewarded him with more goals and assists this season.

As Nige tells me, a lot of Atalanta’s goals come from patient build-up play in the final third and then a killer pass from Robin Gosens – usually to either Papu Gomez, powerhouse Duvan Zapata or King of Slovenia Josip Iličić. Gosens increasingly is popping up himself to deliver the killer blow, however, with eight goals and five assists this season. The Dutch-German is yet to be capped at international level, but it seems only a matter of time before this happens (assuming football eventually returns after COVID-19).

Gosens’s defensive stats are solid too, with 1.5 tackles per game, less than one foul per match and one clearance per game. He can be caught out of position though; he does get dribbled past once a game on average. The other weakness of Gosens, according to Nige is his right foot – as he doesn’t remember ever seeing Gosens use it! It’s clear he rates him as a huge talent, in technical and physical terms. The only other drawback is that Gosens’s best performances this year seem to have come as a wingback, but it seems like he’d be able to adapt. In terms of a fee, Nige tells me he thinks Atalanta would accept €20m and Emerson; I personally think €30m would secure the services of the man from Bergamo.

Not every player can slot into a defence as seamlessly as Aaron Wan-Bissaka, Trent Alexander-Arnold or our own Reece James have managed in the past season and a half. However, Ian Maatsen is a special talent and I have no doubt that if given consistent minutes, he could do it. At youth level, Maatsen has scored in the FA Youth Cup, scored in a London Derby against Arsenal, captained the development squad, and was rewarded with his first team debut as a seventeen year old in 7-1 EFL Cup rout against Grimsby last September. The big stage does not phase Maatsen – he’s also already scored in a cup final, notching for the Netherlands as they won the European U17 Championship for the second year in a row.

Pacey and skilful, he is capable of playing across the whole defence, out wide, and in central midfield and his skill on the ball is second-to-none. Although sometimes he can be caught out defensively, his recovery pace is a huge factor in helping him get back and resolve these situations positively. His attacking skills continue to improve with every match and with a bit more consistency in the final third, the raw talent he possesses will translate into regular chances, assists and goals. Maatsen signed a new long term deal last month on his 18th birthday and will no doubt play a huge part of Chelsea’s future If afforded the chance. Whatever decision is made for a left-back, Chelsea need to ensure that Maatsen gets ample minutes to impress – despite his diminutive size, there is a potential for him to the next superstar to burst out of Cobham and into the first team set-up.

So how do you solve a problem like left back? In my opinion, the club need to steer clear of Ben Chilwell – he might be a Chelsea fan, but he’ll cost a bomb and may not fulfil his potential. My personal choice would be Robin Gosens: I think whoever gets him will unearth a gem approaching his best years, but I suspect Chelsea might plump for Alex Telles, especially if Marcos Alonso and Emerson reunite with Mister Conte and Mister Sarri respectively. Gosens or Telles would also have several years still at the very peak, allowing Maatsen to get minutes in cup games and in rotation, allowing him to properly take over a number one, when the time comes. If only it was that easy in reality.