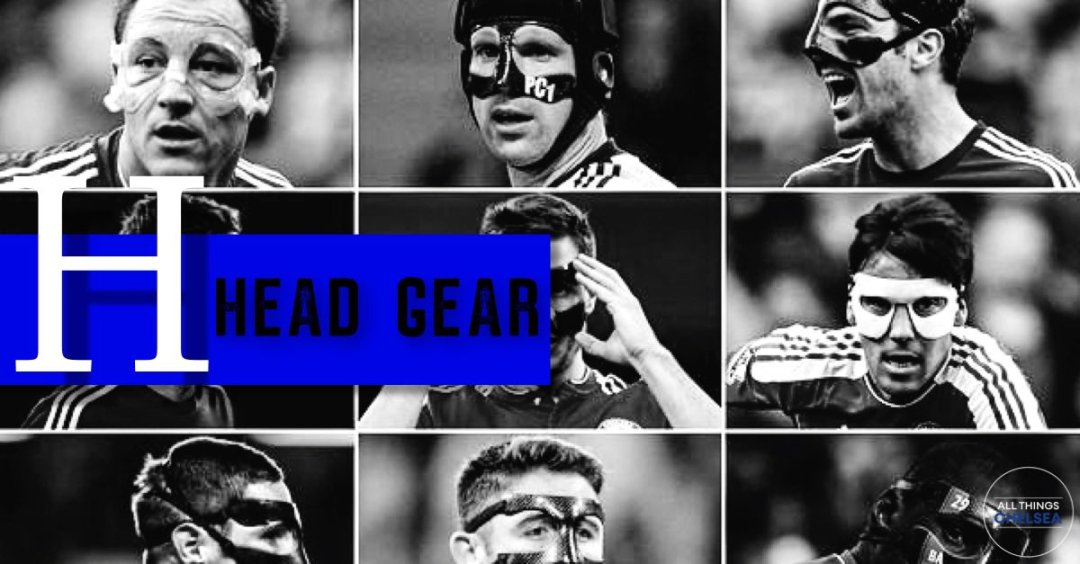 Our club is no stranger to headgear. After all, our greatest goalkeeper and current technical adviser Petr Cech was famous for his protective “helmet” which he wore for roughly 13 years, after suffering a skull fracture in a collision with Steve Hunt in 2006. Apart from this, several players have worn the Zorro-inspired face mask, which is handcrafted in Milan. Following Andreas Christensen sporting the mask in our recent fixture against Bournemouth (back when we had footballing action), our club decided to make a face-mask XI, and it indicates the number of players who have suffered facial injuries while playing for us. These players put their head first- literally. In this article, we will be looking at three players- moments, memories and misjudgements- while wearing the famous headgear.

Every time someone mentions the Czech goalkeeper, the first characteristic that comes to mind- which is rather unique- is his headgear. He boasts the highest save percentage for a man between the sticks in Premier League history, is arguably the best goalkeeper to have featured in the competition, and definitely in our club’s 115 year history. His achievements- both individual and with the team- can be matched by very few shot stoppers in the modern game. His injury against newly-promoted Reading in 2006, to date, remains one of the most gruesome and agonising. The surgeons stated that any further delay in his arrival at the hospital would have been fatal. The doctors, too, had to be very cautious to avoid any soft tissue injury which could lead to seizures and in extreme cases, death. As the neurosurgeons carefully placed metal disks inside our legendary goalkeeper’s skull, our substitute Cudicini had also been hacked down by the home side. Enthusiastic as ever to play the English top flight champions for the first time their history, Reading were the sole reason we ever saw John Terry don the gloves, and go on to keep a clean sheet. A game where tensions flared.

Coming back from the flashbacks which seem to have increased in frequency since self-isolation was mandated due to the outbreak of Covid-19, let’s move on to the topic which I’m fairly certain has never been repeated in the past, and quite surely will not in the future. A football player, wearing a protective helmet, along with a face mask. Yes- Petr Cech did suffer a horrific face injury against Blackburn in 2011, which forced him to wear both guards. Had he not been on the football pitch and elsewhere in that outfit, any person within a kilometre’s radius would have dialed 9-1-1.

While we often have fond memories of the 6’5″ gentleman, I am picking a rare erroneous moment in his acclaimed career. 17th of December, 2011. Chelsea are leading Roberto Martinez coached side Wigan 1-0, destined for victory. Andre Villas-Boas at the touchline; calm as ever, but with a rather awkward aura of nervousness about him. 88 minutes had passed, and Wigan had an opportunity to dampen Chelsea’s high spirits following their vital victory against Manchester City. Hugo Rodallega swung his boot, and everyone- including Jordi Gomez- expected the ever so reliable Petr Cech to hold it calmly. To Gomez’s surprise, he had the ball at his feet, and the gaping goal ahead of him. With the easiest finish of his career, the Spaniard ensured a point for the hosts. Despite this hiccup, the rest of the season panned out rather well for the Blues- and Cech put in the performance of his life in the UEFA Champions League final to grant us the coveted trophy for the first time in our history.

Cesc Fabregas donned the Royal Blue of the pride of London only for four and a half years in total, but is still held in our hearts affectionately. At his time at the club the Spanish midfielder won two PL titles and an FA Cup. His chant “Fabregas is magic” still rings in my years, and his 40 yard lob passes to Diego Costa, etched in my memory. During his time at the club, he too was a victim of a facial injury and had to wear the face mask for a brief period in the 2014/15 season.

He had to wear the mask against our closest London rivals Queens Park Rangers (as Fulham were in the Championship), as Chelsea looked to extend the lead at the summit under Jose Mourinho. In a rather hostile atmosphere at the relegation threatened Loftus Road, the home side absolutely dominated the game. They finished the game with 15 attempts on goal, our goalkeeper Thibaut Courtois pulling off some magnificent saves to protect his clean sheet. What angered the crowd and Chris Ramsey (manager of QPR) was the fact that Chelsea had just one shot on target throughout the entire game- and it was the 88th minute goal by Cesc Fabregas. A classic Mourinho performance, and shithousery at its peak. Almost on par with the famous Liverpool game in which Steven Gerrard slipped to give the ball to Demba Ba.

Eden Hazard capitalised on Rob Green’s error, and moved it on to Oscar. The Brazilian then tied up Fabregas, whose tidy finished gave the visitors the three points and put the title within reach. For some odd reason, I remember this game vividly, along with Cesc Fabregas’s celebration where he took the mask off. The significance of this goal in the outcome of the title was a key factor too. Hence, Fabregas is the second name on this list.

Another Spaniard on this list, “Zorres” as he was called by Juan Mata, our record signing was in the form of his life when he donned the Zorro-themed face mask. Torres faced competition from new recruit Demba Ba for the starting striker role, but was the undisputed first choice in the Europa League as the Senegalese striker was cup-tied. And he stepped up to the task, netting six goals and notching up an assist along the way. He also scored in the final, rounding the Benfica keeper to give us the lead.

Of those six goals which he scored in the knockout stages of the competition, four of them (and the assist) were whilst he wore the protective mask. Three against Rubin Kazan (over two legs), were followed by a goal and assist at home to Swiss side FC Basel. Ivanovic’s last grasp header in the final ensured two European titles in two years for the Spanish striker, who played an important role in both the campaigns. He also ended the 2012/13 season with 22 goals and 11 assists, his most prolific in a Chelsea kit.

So there it is. My memories of those in headgear. Being a fan who started following football as recently as 2010, I’m sure everyone else will have older memories, of John Terry or Paulo Ferreira, but I’ve chosen those which I remember- fondly and dejectedly. Hope everyone had a good time recollecting these moments which seem to have crept into a corner of our mind, and keeping safe in these tough times. Up the Chels!