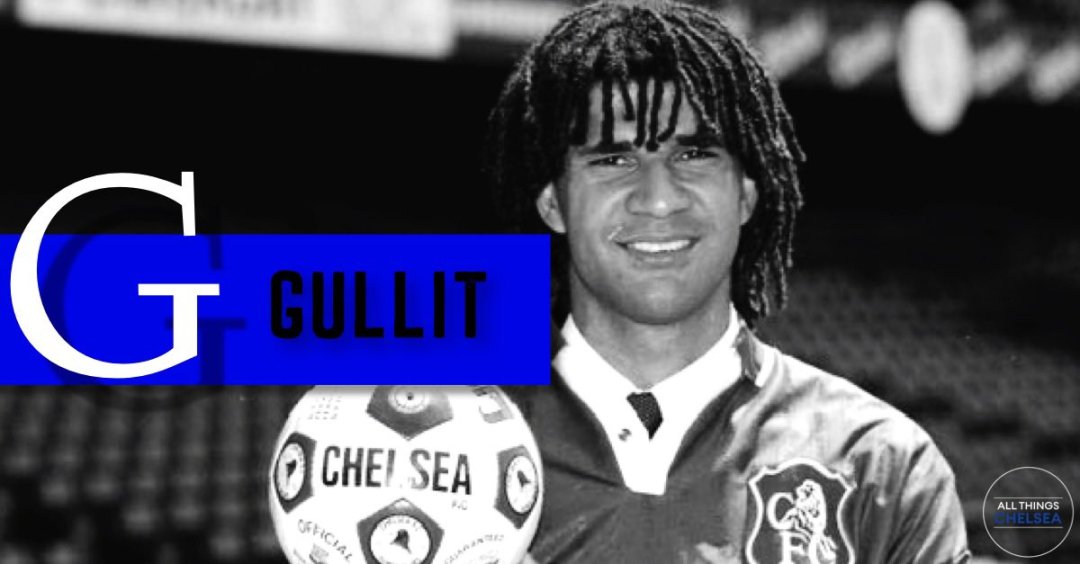 RUUD GULLIT: When The Dreadlocks Came To Chelsea

Many rival supporters will tell you Chelsea’s biggest change was when Roman Abramovich bought the club in the summer of 2003. I think it’s safe to say all Chelsea fans are forever grateful to Roman, and he certainly took us to another level. I say this as the foundations were already there. There was a time when many viewed Chelsea Football Club “a sleeping giant” as we didn’t win anything significant for twenty-six years from 1971 to 1997. However, the real change happened in the summer of 1995 with a signing no one could quite believe.

Manager Glenn Hoddle had just “hung up his boots” and was now entering his third season at Chelsea, except now just as manager. Soon after the conclusion of the 1994/95 season, Chelsea were linked with Dutch superstar and former two-time world footballer of the year, Ruud Gullit. He was available on a free transfer as his contract at Sampdoria had come to an end. The stories surrounding a possible transfer were laughed at by many, and it was unthinkable that Chelsea at that current time could attract a player of such quality. Put it this way: if Twitter was around then and you posted that Chelsea were interested in Ruud, you’d probably delete your account with amount of stick you’d get.

The club denied and denied the rumours before finally confirming the transfer on 31/05/95. I was twelve years old at the time and the thought of Ruud playing for Chelsea was a dream. Despite coming to the end of his playing career he still had plenty to offer. We could all finally believe it when seeing the images in the newspaper the next day. Ruud and Glenn Hoddle with a Chelsea scarf around them, whilst Ruud was wearing the new “Coors” home shirt over his dress shirt and tie.

There’s absolutely no doubt in my mind that the signing of Ruud was one of the most important signings in the club’s 115 year history. It was clearly an attraction to play in London, and also having Glenn in charge. Mark Hughes later signed from Manchester United for £1.5m, and became recognised by Sir Alex Ferguson as one of his biggest regrets in football. Super Dan Petrescu also signed later on in the season.

With the signing of Ruud it was like Chelsea were back on the map again. It was a pre-season friendly at Gillingham that saw Ruud in Chelsea blue for the first time (or should I say, tangerine and graphite). The Premier League season started with Everton visiting Stamford Bridge. Still all the talk before the game was about Ruud. Walking down the Fulham Road if you didn’t have a dreadlocked Ruud Gullit wig on, were you really Chels? He was instantly a cult hero amongst supporters, gliding across the pitch in a sweeper role which allowed him much freedom. He just oozed class; spraying balls around so effortlessly with pin-point accuracy.

I remember Dennis Wise once saying that many supporters felt his own range of passing had improved during this season. Dennis went on to say that he would always look up for Ruud as he was always available. It wasn’t that Dennis’s passing had improved; it was more to do with how well Ruud could control the ball.

Chelsea were becoming more and more talked about. The feature cover of football magazines rarely had a Chelsea player on the front until Ruud arrived. He was everywhere on and off the pitch! More coverage on T.V. and in the newspapers had Chelsea fans believing we were on the brink of something special. Glenn Hoddle was without a doubt getting us close to cup success, having got to the F.A Cup Final in 1994. Our league form, however, remained inconsistent and that reflected in an eleventh place finish. We were still considered a cup team and the football being played was much better to watch. We came close once again to F.A Cup glory only to lose to Manchester United in the Semi Final at Villa Park.

Ruud scored some fantastic goals during the 1995/96 season, and here’s a few you might remember.

Although there were some great goals to savour in all honesty, it was a small part of his game. Ruud’s overall play improved Chelsea dramatically. Assists, build-up play, passing and keeping the ball were key to the team, as well as his experience and leadership, with him captaining the team on occasion. Last year I interviewed former Chelsea teammate Gavin Peacock, and asked him about Ruud. His comments sum it up perfectly:

“Ruud created a world interest in Chelsea. It was an absolute master stroke bringing him in. I think I worked out that six or seven of my last goals, five of them were assisted by Ruud. He could just explode when on the ball and you knew when Ruud went with the ball you could take a chance from midfield, because you knew he’d keep it. You weren’t thinking he might lose it. He would always do the right thing. It was a delight to play with him on the field.”

Towards the end of the 1995/96 season it was announced that Glenn Hoddle would be leaving to take the England job after Euro ‘96. I remember feeling gutted as we we’d come so close to winning something. It would be Ruud that would take over as player manager. Our final game of the season was against Blackburn Rovers at Stamford Bridge. It was a great farewell to Glenn. I’ll always remember one fan at the end of the game running onto the pitch, and proceeded to kiss Ruud’s feet before getting carted away by stewards.

(From my personal Chelsea scrapbook, age 13)

Ruud obviously had no previous managerial experience, but he already had a good team to build on. Italian superstar striker Gianluca Vialli arrived on a free transfer from Juventus. Fellow Italian Roberto Di Matteo signed from Lazio, and French centre back Frank Leboeuf arrived from Strasbourg. The team started to have a real continental feel about it. A great balance that had captain Dennis Wise still leading the team. Young academy players Jody Morris and Michael Duberry were also establishing themselves in the first team squad.

There was much excitement and anticipation going into the 1996/97 season, and with the summer signings it was clear Ruud could certainly attract some of Europe’s top players. The season started with a 0-0 draw at Southampton and Ruud already expected more.

The wins came quickly with Chelsea playing what many described as “sexy football,” a term once used by Ruud. A League Cup defeat at Bolton ended in tragedy, as Chelsea vice chairman Matthew Harding tragically died in a helicopter crash on the way back from the game, killing everyone on board. The club decided to play the next game just a few days later in his memory, which saw Spurs visit the Bridge. Probably the most emotional day there’s ever been at Chelsea, and a game we won 3-1 with Ruud scoring the opening goal.

In November Chelsea made another Italian signing, and it was a certain Gianfranco Zola, who joined from Parma for £4.5m. An absolute genius with a football and another top signing.

Under Ruud’s leadership we finished in sixth place in the Premier League, which was very pleasing at the time. Ruud’s own playing time was always going to be less, and his season was cut short after breaking his ankle at Derby in March.

The 1996/97 season will always be remembered by fans for winning the F.A Cup, which was our first significant trophy since 1971! A campaign that is remembered for Ruud’s tactical genius in the 4th Round in the famous 4-2 comeback against Liverpool, and of course the final itself. Ruud became the first overseas manger to win the F.A Cup. He obviously had no playing part in the final due to his broken ankle, but seeing him lift that trophy will live on in me, like others, forever.

It was an eventful summer with the launch of the new Chelsea megastore. It also coincided with Ruud’s own clothing range, whilst also being the face of Pizza Hut and M&M’s! A Charity Shield penalty shootout defeat to Manchester United followed before the season started. Everyone was still on such a high as a result of our F.A Cup success. The prospect of watching European football in the form of the Cup Winners Cup was very exciting.

The season was going very well and the football being played was very entertaining. There were some fantastic league results, including 6-0 at Barnsley, 6-1 at Tottenham and 7-1 at home to Tromso in the Cup Winners Cup.

A huge shock completely rocked world football when Ruud was sacked on February 12th, 1998. No one could understand it. Chelsea were sitting second in the Premier League, in the Quarter Final stage of the Cup Winners Cup and in the League Cup Semi Final. The departure was thought to be over contract negotiations. Although both camps had different opinions on what happened, it truly left a sour taste in the mouth of us supporters. Gianluca Vialli took over as player manager and we most certainly continued to be successful in the late 1990’s.

As a kid growing up, I would create Chelsea scrapbooks during this era and write to him on occasion. Receiving programmes, magazines and signed pictures was amazing. Here’s hoping he can read this article approaching nearly twenty-five years since signing for the club.

Ruud has said that his time at Chelsea was “the only time I really had fun.” Well, we certainly had fun- we loved every minute of it! Without Glenn signing Ruud, I genuinely don’t think we would be where we are today. Thank you for the memories Mr. Gullit!

You can find more of my Chelsea related articles at chelsearewind.home.blog & CFCUK Fanzine.

One thought on “RUUD GULLIT: When The Dreadlocks Came To Chelsea”