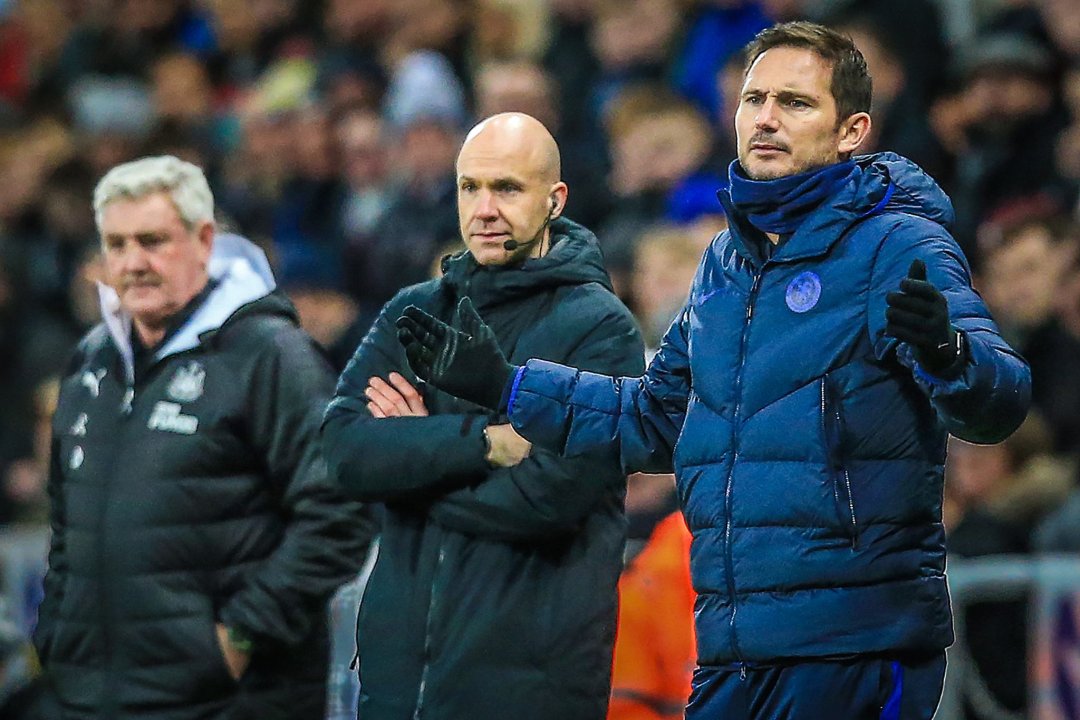 Mentality: Where are Chelsea’s Cojones?

Following a 2-0 defeat to Arsenal in January 2019, former Chelsea manager Maurizio Sarri publicly criticized his Chelsea players as “extremely difficult to motivate” with a lack of “ferocity”. Fast forward one year and it can be argued that Frank Lampard’s Chelsea, whilst not necessarily lacking in motivation, are certainly lacking ferocity in their game. The lack of ability to see a game out has become something of an Achilles heel for Chelsea. Despite lengthy spells of possession, clear-cut chances are not being created and therefore goals are not being scored. Approximately 30% of Chelsea’s goals conceded this season have been in the final 10 minutes! It has become common knowledge to opposition that if you sit back, stay disciplined and defend as a unit, your chance will come. Such has become a popular formula for many teams coming to Stamford Bridge.

So, what’s causing these mental lapses?

Maurizio Sarri was criticised for lack of squad rotation and sticking with the same options. Whilst Sarri took lack of rotation to a whole new level, Lampard can also arguably be criticised for having favourites; sometimes so much so that he ignores his own self-proclaimed, merit-based selection process. Mason Mount in particular comes to mind, for he has featured in every single game this season except Chelsea’s 7-1 demolition of Grimsby in the League Cup. Comparatively speaking, Mount is to Lampard what Jorginho was to Sarri.

Maintaining motivation within an entire squad is certainly no easy task. Naturally, if a player works hard in training but sees limited minutes, his motivation will decline. On the other hand, if a player is playing week-in and week-out regardless of his performances, it is likely they will slip into a comfort zone and become prone to taking their foot off the proverbial gas. This is basic human nature, after all. Let’s take the current striker situation as an example:

Tammy Abraham’s played 2,442 minutes of game time this season; a large amount of play time (especially at this level and point in the season) for a striker his age. This season he’s been one of Chelsea’s best players and has the highest amount of non-penalty goals in Europe’s top five leagues this season for players under 22 years-old. Nonetheless, it’s obvious that he’s not been at his best every game, particularly in the last two or three months. Is Lampard relying a little too much on him?

Batshuayi (660) & Giroud (282) have amounted 942 minutes of football between them, with Lampard publicly reminding the club of his need for a new striker.

Firstly, how can any player be fully motivated with such limited game time, lack of managerial trust & knowing that it’s likely you’ll be on the bench again for the next important game (regardless of performance levels)?

Secondly, with such limited minutes it’s almost impossible to sustain any real momentum of form, let alone tactical understanding and cohesion with teammates.

Thirdly, Lampard’s public desire for a striker, true or not, is absolutely not what any backup striker wants to hear. If Tammy happens to get an injury, good luck to Frank trying to get the best out of either Giroud or Batshuayi, especially after labelling Chelsea as “underdogs” due to not signing anybody.

Despite the above, his management hasn’t been terrible by any means. His early treatment of Pulisic brought the young American to the next level through some tough love. It appears his next high-profile target is Kepa, and hopefully we see a similar turnaround.

One of the biggest issues with this Chelsea team is that players are simply too nice. In fact, it was just a few months ago that Chelsea failed to record a single foul.. at home.. against West Ham.. IN A LONDON DERBY!!! AND we lost that game. Simply not acceptable.

It’s probably fair to say that the two current players with a bit of ‘spike’ are Rudiger and Jorginho. Though, Rudiger seems to enjoy combining aggression with clumsiness, a not-so-favourable combination. And despite Jorginho leading the Premier League with nine yellow cards this season, I don’t envision many players being particularly fearful of him.

Chelsea are severely lacking players who can lift the whole atmosphere in the stadium through a crunching challenge. Without moments like this, fans often remain quiet and the opposition remain fearless; a far-too familiar and disparaging feeling at Stamford Bridge.

A good start would be looking at somebody like Ethan Ampadu, who despite his struggles at RB Leipzig, doesn’t back down from any player.

Chelsea’s injection of academy graduates into the first team has been something fans have dreamed of since Abramovich took over. Abraham (22), Mount (21), Hudson-Odoi (19), Reece James (20), Tomori (22) and Christensen (23) have all featured extensively this season, along with Summer-signing Pulisic (21).

Unfair criticism has, at times, been directed at almost all of these players. It is easy to forget that for at least five of these players, this is their first true test at the highest level: A physically, mentally-gruelling season of 60+ games against the best talents in the world. Allowance must be made for natural error and inconsistency at that age. These players will grow with experience and with the correct guidance. Even with all of the above in consideration, Chelsea still sit in fourth place on the table, which is a huge achievement and something that should be celebrated more.

Despite the above, there is room for improvement. Chelsea have dropped points on many occasions due to tactical naivety. Most commonly are tendencies of losing concentration and discipline in the final ten minutes, and forgetting the importance of taking a more pragmatic, compact approach when pressure is high. Some find themselves out of position, perhaps because of focusing too much on winning the ball back and getting it into the opposition’s half. There is a clear lapse in seeing out a result, so both Lampard and the experienced players should be doing more to guide their younger and inexperienced teammates through these moments.

In the golden days of Cech, Terry, Lampard and Drogba, Chelsea had a solid spine. Elite talent could be found in every third of the pitch, and each would deliver a minimum of 8/10 in every performance. This effort would thus drag those around them up to a similar level, or provide inspiration in times of turmoil. Since then we’ve had the odd talent help us through tough times, most notably Eden Hazard, Diego Costa, Cesc Fabregas & Branislav Ivanovic.

As discussed, Chelsea’s starting XI is now largely occupied with academy prospects aged 23 or under. This leaves just Azpilicueta, Alonso, Emerson, Rudiger, Jorginho, Kovacic, Kante, Barkley, Pedro and Willian as Chelsea’s go-to players in times of turmoil. Pedro, Alonso and Emerson haven’t been included due to their likely departures in the near future. So other than those three, how many of the remaining seven can our younger players truly rely on for guidance?

Chelsea’s captain Azpilicueta is undoubtedly a Chelsea legend, but a legend who is on his decline. His defensive skills remain his best attributes, and he still plays an important role in the bigger games. Nonetheless, we are shifting to a more attacking-based game plan, and it’s obvious that Azpilicueta’s attacking skillset is limited. Against smaller teams he’s ineffective going forward. In fact, teams often let him have the ball to limit Chelsea’s attack. His first-team opportunities will likely be limited once a decent left back has been signed.

Rudiger is arguably Chelsea’s most vocal player on the pitch. It is one thing showcasing leadership by being vocal, but another thing showcasing leadership through consistent top-level performances. He is a decent defender, but not a great defender. Until he improves (and IF he improves), his impact as a leader will always be limited. At 26 he’s stepping into his prime, so it’s now or never. There is no better time to prove his worth than the second half of the season.

Chelsea’s vice-captain Jorginho is arguably the second-most vocal player after Rudiger. He generally exhibits a leader-type influence on the pitch, but this is usually when the team is set up to suit his skillset. He can often be ineffective, especially playing against teams setting up with a low block. This results in him becoming more of a passenger than a leader. His greatest footballing achievements are two Italian domestic cups and a Europa League Cup. A fairly underwhelming trophy cabinet for somebody who is relied upon to have a “winning mentality”.

Other than Pedro, Kovacic is comfortably Chelsea’s most decorated player. At the age of 25, he has already achieved more than most players could ever dream of. On the downside, most of these titles were won during his time at Real Madrid, where it is arguably fair to say he had played more of a squad role than a key role. Nonetheless, the experience he’s gained has been valuable, and has definitely reflected in his performances this season. He has started taking games by the scruff of the neck and dominating the middle of the pitch. This makes it all the more bewildering why Lampard has suddenly dropped him from the starting XI. Hopefully this isn’t permanent, and Kovacic can cement his first-team place for good.

Most would agree that Kante is Chelsea’s only player than can be considered World Class. Kante is comfortably Chelsea’s least vocal player, and in contrast to Rudiger, expresses leadership in the form of top performances. Kante’s performances this season have definitely declined and resulted in criticism from the fanbase. It can be argued that he’s playing in a role that he’s not comfortable in, but at this point in the season, Chelsea need his experience and talents more than ever. It’s time to step up N’golo.

Not much to say. Step up or step off. It’s looking like it’s time to step off if things don’t step up by Summer.

At a first glance Willian’s trophy cabinet is impressive. Although, when you highlight that 12 of the above trophies were won during his time in Ukraine, a dose of reality sets in. Willian certainly has had a taste of winning, but there are fewer Chelsea players with a higher level of inconsistency than him. You never know which Willian is going to turn up, something you expect from a 20 year-old, not a 31 year-old. This renders Willian as unreliable and therefore not a leader. (Not to mention, he’s passed his best.)

What is most alarming, however, is that other than Azpilicueta and Willian (who are both past their best), none of the above players have played in a Chelsea shirt for more than four years. Do they really fight for the badge with the same passion as those that have before? This is not to say they don’t, but we are clearly lacking an experienced head who truly bleeds blue and thrives week-in and week-out in front of the Stamford Bridge crowd.

Chelsea’s next five fixtures are Manchester United, Tottenham, Bayern Munich, Bournemouth and Liverpool. This is a huge test of character for a club of Chelsea’s stature, with results likely to be instrumental towards determining their final position this season. Thinking positively, however, worst-case scenario will serve as a valuable learning curve for the young players. Let’s hope this winter break gives them all the boost they need to push strong til the end of season.