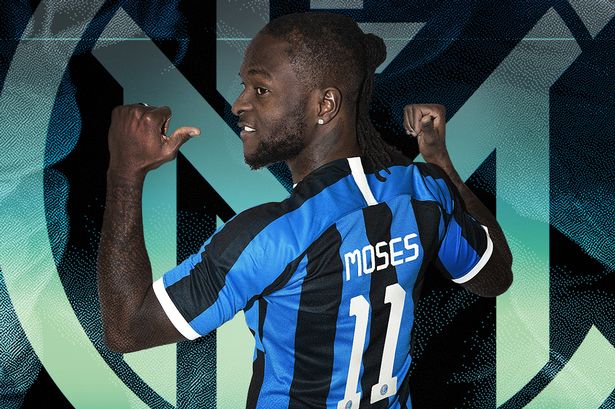 Victor Moses – from anonymity​ to the top and back again.

Victor Moses looks set to be plunged back into the mainstream of professional football, with his guardian angel Antonio Conte resurrecting his ailing Chelsea career, not for the first time. A £10 million option to buy may, in fact, spell the end for the Nigerian’s fascinating eight-year spell in West London and as such it only seems apt to pay tribute to a player who has never stopped trying to reinvent himself in search of the star-studded acclaim that came more naturally to the Eden Hazard’s of this world.

His arrival from Wigan in the summer of 2012 blurred seamlessly into the background of a chaotic, unstructured but ultimately successful transfer policy intended to capitalize upon that infamous night in Munich months earlier. Moses seemed destined to join the exhaustive list of cannon fodder that circulated in and out of Stamford Bridge, with his move seen by many as nothing more than an attempt to monopolize the young British market. Roberto Di Matteo’s short-lived shot at establishing a dynasty did little to help Moses settle at his new club, and opportunities were limited and only made harder by the form and fanfare of Hazard, a then fresh-faced £32 million signing from Lille.

Hounded and vilified for much of his time in charge, Rafael Benitez deserves far more respect for his role in rebuilding and re-energizing a squad in the midst of their first fundamental transition under the ownership of Roman Abramovich. Many of those guilty of spouting this vitriolic rhetoric are averse to taking the tainted sentimentality out of the Spaniard’s tenure and as such many are neglectful of the job that Benitez did in bringing the best out of Moses and Fernando Torres during the club’s triumphant Europa League campaign.

Chelsea’s run to the final was not for the faint-hearted, and for every stellar attacking move there was an equally calamitous defensive mistake but through all the mire of inconsistencies there stood one constant variable, Moses. Often deployed on the right-hand side of a three-pronged attack Moses’s industrious running and eye for goal thrived under the spotlight of Juan Mata’s creativity and he went on to net in three consecutive knockout games, averaging nearly a goal per game. Goals aside his overall game stood far ahead of any other Chelsea player, Moses averaged more key passes and shots than Hazard on top of contributing to two times the number of goal involvements despite racking up marginally fewer minutes than the Belgium winger.

Branislav Ivanovic’s dramatic late header seemed to encapsulate Moses’s months of hard work that would not go unrewarded but just as quickly as he’d emerged from the fringes to catapult the Blues to a first Europa League triumph he was no sooner dismissed by Jose Mourinho’s unprecedented homecoming. Three years of fruitless loan spells across England saw him witness the rebirth and fall of Chelsea as the countries dominant force under the increasingly pragmatic and temperamental Mourinho –

To borrow a phrase from F. Scott Fitzgerald Moses was within and without, simultaneously enchanted and repelled by the inexhaustible variety of life.

Once at the forefront of a burgeoning young side and destined for stardom, Moses had been relegated to the ceaseless stagnation of Chelsea’s cyclical loan structure – Groundhog Day incarnate. Nearing his prime years and having failed to replicate the form that had bought him to prominence under Benitez, Moses’s days at Stamford Bridge seemed numbered. In stepped the irresistibly enigmatic Antonio Conte, a manager who for the first time in four years knew how to harness the raw physical ability and tactical adaptability of Moses.

Even with Conte’s blessing and a superb late counter-attacking goal against Burnley, Moses would only start to truly cement his place in Chelsea folklore upon Chelsea’s move to a back three. reinstated to the starting line up as a right wing-back Moses was able to call upon his tireless work rate and ability to turn over possession high up the pitch. He had shown glimpses of his defensive capabilities under Benitez averaging a combined 2.5 tackles and interceptions per game. The rest they say is history, as the Blues coasted to the Premier League title with Moses firmly embedded as a cult hero among Chelsea’s team.

Moses’s coming of age story did not, however, follow such a linear narrative and a hapless red card against Arsenal in the FA Cup final denied Chelsea their first domestic double since 2010 and laid the groundworks for the complacent demise of Conte’s legacy. Disjointed ventures into the transfer market coupled with the all too familiar reemergence of the player power dynamic saw the departure of Conte and with that Moses was once more within and without – viewing Frank Lampard’s youthful regeneration project from the periphery.

This article is an unapologetic homage to a player consistently overlooked in regards to Chelsea’s recent success and with this, Moses will hopefully be treated with the respect his efforts over the years have deserved but not necessarily reaped.